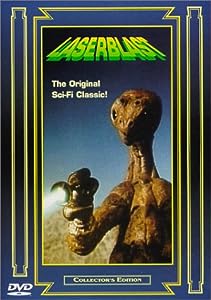 Mom and Dad Save the World

Mom and Dad Save the World (Image via RottenTomatoes.com)

Or do they?  Think of a movie with oversized puppets, brightly colored sets and Jon Lovitz.  Yup this movie has that.  Emperor Tod Spengo  (Lovitz) wants to blow up the world, Teri Garr (mom), and Jeffrey Jones (dad)  are sucked into this strange world of WTF to save the world.  I must say for once Jeffrey Jones isn’t playing a asshole for a character, just a dumb ass, funny thing is the characters name is DICK .

The movie is pretty bad, but you can make it to the restroom before you have an accident.  We rate this 2.5 crappers.  Hope you don’t go through what we did watching this. Speaking of which I need to change my depends.. This one gets a royal flush.  Don’t waste your time …

Night of the Living Dorks

Zombies from high school that are geeks err dorks get the last laugh of flesh.  They don’t eat brains they eat everything else including members of the football team, the cheerleading squad and the coach!

Peices of the dorks falls off, and the favorite word in this movie is shit.  So over used it describes this movie to a tee.

Even worse this movie was not in English so the audio was dubbed in, make it more campy that every!

Hack! No it not a hacker movie. Its a crapper movie!

Don’t cheat in school, don’t party and don’t make out when there is a madman around with a chainsaw.  Hack! is a horrible attempt at a high school sexploitation slasher movie.  Then again never sign up for a Island field trip either.  It sure didn’t improve your grade and having your body parts removed during a sex scene, hmm?

Staring Danica McKellar (The Wonder Years), William Forsythe
,Jay Kenneth Johnson
(days of our lives).  Hack! is a hack and slash gorefest with a weak plot, no on screen energy and  fake blood by the gallon.

Crapped hack 2.5 on the scale

A very young Adam Sandler (Schecky Moskowitz) is a comedian , oh really?  Well he is struggling to make a name for himself and winds up working on cruise-ship  as a putz.  So really he plays Adam Sandler as Adam Sandler.

The punch lines are non existent, if you are a Sandler fan you wont like this movie at all. This movie has several productions issues, like the film aboard a ship that was used for a beauty pagent, the wrong lens was brought for the cameras and basicly crappy story line put Going Overboard to going.. going.. gone!

Craig Shoemaker (narrator/ Stoners mind), Lee Abbott , Franklyn Ajaye, Michelle Alexandria.. This movie should be called a stetch or and endorsement to the pot culture.  This entire movie is full of stupid pot related stories, f*bombs, and nudity.  Why?  Because pot-heads always get the hot models and have millions of dollars to waste because of their high paying jobs.  Wait what, no they are 40 years old and moved back in with their mom and smell like the pee in the underwear!

Totally baked is a pot already, but one you piss in.  This is a waste of screen time and paid actors.

DOOM was Doomed from the start.  There has always been a problem with movies based on video/computer games.  They all seem to suck.  Well Doom lives up to this as well.  Based on one of the best selling computer games of all times, Doom brings us Dwayne Johnson aka the Rock (Sarge) {Tooth Fairy, WWF as the Rock), Rosamund Pike (Surrogates, Die Another Day), Karl Urban (Star Trek, Red).

Space is a great place to fail in the movies.  Doom sends marines to Mars to investigate strange finding, and well all hell break loose to say the least.  Sarge (The Rock) only concern is to kick ass and take names, but forget the names he would rather kill em all and let God sort them out.  Karl Urban plays John whom happens to be named similar to John Carmack the co-founder of ID software the makers of the video game Doom.  There is a even a 5 minute DOOM view of the video game play when John zones out.  This happens to be the best part of the movie to be honest, and fans of the game will surly love that homage to the video game as well.

The demise of this movie is three fold.  ‘Based on a video game’, bad acting, and a 100 minute commercial for a video game.

Scores a 2.5 on the Doom crapper scale.

Killer Klowns From outer-space (yes  with a K).

Staring John Vernon (Animal House), Grant Cramer (The Young and the Restless) , Suzanne Snyder
(Weird science). The plot is simple, what may have been a meteroid falls to earth is actually a clown space ship that lands in a small town America.  Tag line : Horrific Harlequins with an appetite for close encounters! Ha ha , the townfolk are in for it, these kowns will wrap you in cotton candy like a black widow spider and suck you juices.  Yum Yum.

Typical late 80s horror comedy, with electronic rock music, curse words and horrible acting.  What else can you ask for in a movie about klowns that would scare even the likes of Predator.

2.5 on the crapper scale. Fear the klowns.

Move out of the way corey

Ok so how many boobs can you get on the screen at once?  Let’s see there is Corey Feldman, Al Lewis
and oh ya many Bikini glad ladies that look like they just stepped out of the bodyshop to be in this stupid sexploitation movie that is nothing more than a music video.  I kid you not take out all the nudity and rock music and you would have a 30 minute movie of Feldman trying to look cool in southern california.

Seriously from a weak storyline to a rock video style girl pulling her top off to show off the fake ‘ladies’  I doubt this movie has any real woman in it other than the fish in the ocean.  I forget what the plot line is in this movie as it just trash.  The tagline of This Year’s Student Body Is Shaping Up. make no sense  what students ?  No one has a brain in this movie.

Rated R for pervasive nudity and some sex scenes.  Sex scenes  Ya topless models dancing to music like it was a rock video!  many times over ..

3.0 on the crapper scale on this one.  boooo.  wait boooobs, wont cut it for this crapfest.